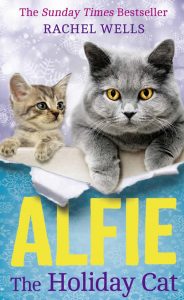 I was dreaming about pilchards when I felt a tail tickling my fur. I opened one eye to see George, my kitten, hopping around my bed excitedly. I opened the other eye.

‘Wake up Dad, it’s Christmas,’ he purred in my ear. I raised my whiskers. It felt far too early to be awake.

‘Wake up everyone!’ Summer’s voice shouted, shattering any peace and quiet. ‘It’s Chrissssmass.’ She had joined George and they were both jumping around, making me feel quite dizzy.

‘Meow,’ I replied. I saw shadowy darkness poking through the landing window, but I knew no one would be getting back to sleep. When Summer made up her mind, no one stood a chance, and George was turning out to be the same way. The door opened and Claire, wrapping her dressing gown around her, emerged with a sleepy, tousled Jonathan on her heels.

‘But Santa’s been, I know he has,’ Summer shouted. ‘So, it must be Christmas time right now!’ she stamped her little foot. George tried to stamp his paw but he hadn’t mastered that.

‘Where’s Toby?’ Jonathan said, picking Summer up and giving her a hug. ‘Happy Christmas, my little princess.’ She snuggled into him.

‘Meow,’ I replied. He was still in bed. Toby was the only sensible member of the family, it seemed.

It was George’s first Christmas ever and Toby’s first with us, which meant it was one of the most special Christmases ever in Edgar Road. We had all been bouncing under the weight of excitement and expectation, although Summer had been the most excited, with George a close second. Toby had been a little hesitant. Claire and Jonathan said it was because he hadn’t had a good life up until now.

Toby had been adopted by us. He was five years old and, although Claire and Jonathan hadn’t shared details of his life so far, I knew he had been taken away from his parents and had lived in foster care before he came to us. That meant he had had more than one home up until now. Claire said to him, to Summer, and to me and George that we were his forever family and he had a forever home with us now. I understood that better than most. I had had a life before here too, although that did seem so long ago now.

When I first came to live on Edgar Road, I had also had a home before. My home had been happy, full of love, but my old owner died leaving me homeless. Instead of being put in a shelter I had taken matters into my own hands and I’d taken a treacherous journey to Edgar Road where I learnt many things along the way, and then I became, as I am today, a doorstep cat. This means I have more than one home and more than one family to love me and love in return. It so happens that I mainly live with Claire and Jonathan now – this is my forever home too. But they used to live separately, and I lived with them both until I brought them together and they got married.

I also have two other houses I visit and we’re all great friends, more like family even. Claire and Jonathan, with Summer and Toby; Polly and Matt who have two children, Henry and Martha; and Tomasz and Franceska, my Polish family who have two sons, Aleksy and little Tomasz. They are my families, and since George came to live with us as a tiny kitten – I adopted him – they are his families too.

But back to Toby; he had obviously had a traumatic beginning in life and although he was loved and safe now, it was a big adjustment for him. When he first came to live with us he cried every night. Claire would go and cuddle him, Jonathan would read him stories and in the end George took to sleeping in his bed, right beside him. He does that every night now. Toby sleeps really well with George beside him, it’s the only way he will sleep I think. I worried at first that Summer might mind, she is a madam and she thinks that George is her kitten, but actually she’s been very lovely about sharing. Although she tried to demand a goldfish, which is a terrible idea. A fish where two cats live, whoever heard of such a thing?

So Toby and George have a very special bond, which I like to think is down to me a bit. They were both the newest members of the family, which helped to bind them, but of course we all love them both very much. It is clear, though, that George has been instrumental in helping Toby to feel at home – he’s a chip off the old block it seems – and now he has settled in it feels as if Toby has always been with us.

Before Christmas, when Claire and Jonathan tried to get him to write to Santa and ask for presents, he was reluctant. In the end Jonathan got a catalogue with lots of toys in it and they went through it together; it was a slow process as Toby didn’t want to ask for anything. And this is the heartbreaking part: he told George, when they were in bed one night, that it was because he thought if he asked for things he might get sent away. When George told me this I felt my heart shatter, and trying to convey that to the humans wasn’t easy but in the end they seemed to get it. I did have to work quite hard, and George shredded the catalogue in the process, but I think they began to understand.

Jonathan and Claire sat Toby down and told him he was their son now and that nothing he could do would change that. They also showed him Summer’s list – although she couldn’t yet write, she managed to draw pages of toys she wanted (it was pretty much an entire toyshop) – and in the end they managed to coax a letter to Santa out of Toby. Jonathan explained that Santa would bring him a special present but Mummy and Daddy would buy him some as well. This seemed like an alien concept for Toby but he seemed to understand a little.

Claire went to Toby’s room, where he was waking up, rubbing sleep from his eyes.
‘Is it Christmas?’ he asked.
‘It is, darling,’ Claire replied. ‘Now shall we go and see if Santa’s been?’ She kissed him and engulfed him in a hug.
‘But what if he hasn’t?’ Toby asked.
‘I know he has, and do you know how I know that? Claire asked. Toby shook his head. ‘Because I have it on good authority that you were on his good boy list,’ she said gently. She was such a good parent, to all of us.
‘Really?’
She nodded, then picked him up and carried him downstairs.

Summer had already bounded ahead with Jonathan trying to hold her back as she rushed to open the living room door. George had almost flown down after them and I trotted behind Claire and Toby.

I was trying and failing to restrain George. The run-up to Christmas was exhausting for parents, I had heard that before, but this year I experienced it first-hand. George, as well as being full of excitement, loved the shiny baubles on the Christmas tree. He liked to look at his reflection in them – no idea where he gets his vanity from – trying to use his paw to get them off the tree, and on occasion he succeeded. He had been told off many times by Claire, Jonathan and me for playing with them, and there had been breakages. He also liked to try to hide under the tree, jumping out to surprise us, which had meant that the tree had been relieved of a few of its branches and quite a lot of pine needles. (By the way, having to get the pine needles out of George’s fur had been pretty much a festive full-time job.) Jonathan moaned about the mess, Claire complained about the broken baubles, and I had possibly lost enough of my lives with the shock of having him jump out at me on numerous occasions. There was nothing we could do to stop it, however, except keep a close eye on him, keep the living room door closed and Claire had moved his favourite mirrored baubles higher up the tree.
Jonathan stood at the door. We all crowded around.

‘I should check that Santa really has been,’ he said. He opened the door a crack and George skirted through – honestly there was no keeping him back once he saw the tree. I noticed that Jonathan switched the Christmas tree lights on before fully opening the door and, as they winked and twinkled, we all made our way into the living room where a mountain of presents waited.

Before the children could dive in we all stopped.

‘George!’ Claire shouted. George, it seemed, had spotted the mirrored baubles straight away and launched himself at the tree, jumping about half way up. It seemed to play out in slow motion as he yowled, having not thought it out, and ended up clinging to some of the branches. He had got his paw tangled in the lights and the bauble that he had been after fell to the floor with a thump, eliciting another cry. As the tree began to lean to the left, it looked as if it might fall. I didn’t know what to do as I stared on in horror.

‘Daddy, do something,’ Summer cried. Jonathan sprang into action, grabbing the tree and pushing it back up right. Claire batted her way through the piles of presents to secure it again, emerging looking a little dishevelled with pine needles in her hair. And as I meowed anxiously for George to let go, he did, managing to disentangle his paws from the lights and falling into Toby’s arms. Toby appeared surprised as he caught him, and then as George nuzzled him to say thank you he smiled.

We’d been hearing that a lot since the kitten had become part of the family.