By Alfie on 5th December 2017 in Christmas

My kitten George was tangled in tinsel once again. I wasn’t sure how he managed it, but since the Christmas decorations had gone up – promptly on the 1st December, George had been up to no good. My owner Claire liked to enjoy the run up to Christmas fully, whereas her husband, Jonathan said it was far too early, but he was a ‘bah humbug,’ whatever that was. We all knew it wasn’t a compliment though.
However, since having to rescue George from the Christmas tree a number of times, untangle him from tinsel and keep him away from the dancing Santa who he kept trying to attack, I was beginning to feel on Jonathan’s side. It was exhausting and we still had over two weeks to go. I wasn’t sure the decorations, or me for that matter, would survive.

It was George’s first Christmas, so I was trying to be patient. Although I was pretty sure that when I was a kitten I didn’t cause this much havoc. George was so excited, but he wasn’t exactly sure why. A bit like the kids.
‘Thanks for getting the naughty tinsel off me,’ George said.
‘Again.’ I raised my whiskers. ‘Please try to stay away from it. And the tree, and well, everything.’
‘I really will try but I can’t promise anything. What I really want to know though, Dad, is what Christmas is actually for.’
‘Well that is a good question,’ I replied. And one I wasn’t exactly sure how to answer. I had gleaned a lot of information in my life, but still, Christmas was well, it was just Christmas. I had never really thought about what it was actually for. When I was a tiny kitten, Christmas was a quiet affair, just me, my sister cat Agnes and my owner Margaret, she would invite a friend who was also on her own for the actual day, and Agnes and I got plenty of treats. But then when I moved to Edgar Road (after Margaret and Agnes were gone and I was all alone in the world), Christmas was very different. Children were involved, presents piled under Christmas trees, there were parties and lots of noisy fun, although I still got plenty of treats. I looked at George, stalling.
‘Why do you ask?’ My go-to delaying question.
‘Well, there’s a lot of stuff going on and I don’t know exactly understand what it all is.’ When he looked at me with his big, innocent eyes, I felt my heart burst with love. I have loved many people, and cats in my life, but the love I have for my kitten, is unlike anything I’ve ever experienced. I have heard many human parents saying this and now I understood.
‘So, son, what do you think Christmas is for?’ Yes, I was deflecting a bit, but I still needed more time.
‘Well, I have tried to pay attention but everyone seems to think it’s for different things. Summer says it’s for Peppa Pig toys which Santa is going to bring her.’ He looked so serious as I nodded. ‘And Toby, well he says, when we’re alone, that he didn’t much like Christmas before but this one is going to be the best one ever, but he’s nervous too because he doesn’t know what a Christmas really is either.’
I felt a stab of sadness when George said this. Toby had had a rotten time before we adopted him this year at the age of five, and he was the loveliest, sweetest child ever. This was the first year in his life that he’d even had a Christmas tree. A heart-breaking, sobering thought.
‘It will be,’ I promised, resolving that I would do everything in my power to ensure it was.
‘Claire keeps saying it’s a time to be with everyone you love and also to think of those who don’t have as much as we do. She says that it’s our responsibility to help those less fortunate. But I don’t know how to find these unfortunates.’
‘Well, son, there are lots of people and cats who aren’t as lucky as us, but we should just keep our hearts open and if we are needed, be there to help.’ As many parental conversations went, this wasn’t my finest. Sometimes the kittens seemed to be more intuitive than the grown-ups.
‘Oh, and Jonathan says Christmas is for throwing all your money away on one day, which goes past really quickly and, quite frankly, could be better spent elsewhere.’ As George looked at me in confusion, I felt my heart melt yet again.
‘I guess Christmas is all those things,’ I started, trying to ensure my voice was confident. ‘Well, apart from Jonathan’s explanation. It’s the presents that someone called Santa brings, it’s about family, it’s about counting our blessings, and most of all it’s about family and friends.’
‘And pilchards?’
‘Yes, if we are lucky.’ We both licked our whiskers.

George took our chat to heart. As December began to pass us by, George showed affection to everyone, cat, person, lamppost. He even tried to befriend a neighbours dog but, was growled at in return, so decided to take dogs off his Christmas list. It was a shame that he didn’t take tinsel off, because the tangling was still a fairly regular occurrence.
Just before the school holidays, Toby came home from school, and while everyone was busy in the kitchen, he ran up to his bedroom in tears. George rushed up after him before anyone else noticed. I followed him. As Toby lay on the bed sobbing, George curled up next to him, I started fretting. I knew that I needed to do something and fast. I ran downstairs, mewing at the top of my voice until I got Claire, Summer and Jonathan’s attention. It took a while but finally they stopped what they were doing and looked at me.
‘What is it Alfie?’ Claire asked.
‘YOWL,’ I shouted. I then went back upstairs, with them hot on my paws.
‘Toby, what is it?’ Claire said as she joined him on the bed, scooping the sobbing boy into her arms.
‘Meow.’ George took me to one side to explain. It seemed George wasn’t the only one a little confused by Christmas.
‘Come on Tobe, you can tell us anything,’ Jonathan coaxed.
‘And me too,’ Summer finished as she hugged her brother.
‘I don’t know how to do Christmas,’ he finally said, his words hicuppy.
‘What do you mean, darling?’ Claire asked, stroking his hair.
‘I know,’ Summer cut in. She was quite a madam, but one with a lovely heart and an even cuter smile.
‘Go on then,’ Jonathan grinned.
‘You have to be a good girl, or boy, Toby, and you write to Santa and ask for lots of toys, and you then keep being good, at least until after Christmas.’
‘That makes sense,’ George hissed in my ear. I shook my whiskers, it really didn’t.
‘Well, that’s one way of looking at it,’ Jonathan said, diplomatically. ‘But Toby, you are a good boy, one of the very best, so if Summer’s right then you are doing Christmas very well.’
‘But at school the teacher said that Christmas is about the birth of baby Jesus and he was a gift from God, and that’s why we give gifts to people we love,’ Toby explained. I glanced at George. Maybe I should have left the explanation of Christmas to the humans, I hadn’t quite got a handle on it, it seemed.
‘Well yes,’ Claire said. ‘What’s wrong with that?’
‘I don’t know how to buy gifts,’ Toby said finally. I saw Claire and Jonathan exchange glances.
‘I don’t know either,’ Summer suddenly looked panicked.
‘So, if we have to buy gifts for people we love and we don’t know how to buy gifts then how do you know we love you?’ Toby’s logic was, well, almost logical, I thought.
‘Oh Tobe, buying gifts is only one part of Christmas. But, you can always ask me to take you shopping, or Jonathan.’ They looked at each other again, as if it hadn’t occurred to them that the children would want to buy presents for them. ‘But we don’t need you to buy us gifts, honestly, you two are the only gifts we need.’
‘But I want to. I want to give you a gift because I love you so much. And I’ve got pocket money,’ Toby said.
‘Me too.’ Summer was definitely on this bandwagon.
‘How about we all go shopping this weekend,’ Claire said. Jonathan tried not to looked dismayed. He hated shopping.
‘I need to write a list,’ Toby suddenly dried his tears and jumped up.
‘Me too,’ Summer said.
‘Well you can’t write so maybe we could do it together,’ Toby suggested.
‘Yes!’ Summer beamed.
‘This is my first ever Christmas with a family, so I have to make sure it’s right,’ Toby said, seriously pulling out a pad and pencil.
‘Meow,’ George said, meaning ‘me too.’
‘It will be perfect, Toby because you are with us and we’re a family, a wonderful, perfect family,’ Claire said, teary eyed. ‘Me, Jonathan, you, Summer, Alfie and George, the best family ever.’
I felt myself choking up. Even Jonathan blinked a bit, I could tell he was emotional because he was staring at his socks.
They went in for a hug, all of them, with George right in the middle. I looked on feeling so warm and fuzzy; I was so proud of my family, and so, so lucky to have them all.

Later that evening as George and I went out for our last walk, he was quieter than normal.
‘Are you alight son?’ I asked.
‘I’m more than alright, Dad,’ he replied. ‘I know what Christmas is about now, it’s simply about love and nothing else matters.’ I was so, so proud of my boy. ‘Apart from Pilchards of course,’ he finished.

A Cat’s guide to Love and Romance, by Alfie the Doorstep Cat
Win a signed copy of Alfie In The Snow & a treat for your cat! 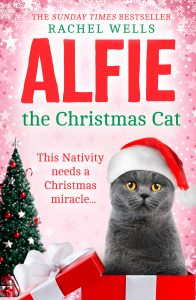